The New Experiment: Putting Nature on the Rack

As nature came to be modeled as machine during the period of the Scientific Revolution, a new spirit of began to arise in which nature was not seen as having intrinsic value, but only value as an object of human use — and as an object of technological control.

Writing around the end of the sixteenth century, Francis Bacon used language to describe this new idea of human domination over nature that, in its imagery, is shocking to many contemporary readers. This brief  excerpt about Bacon’s philosophy is taken from The Soul of the World, chapter 8, “In the Name of Utility: The Exploitation of Nature and the Decline of Pleasure.”

Like René Descartes’ search for a universal science, Francis Bacon (1561–1626) spoke of a novum organum, a “new instrument” of human inquiry that will satisfy humanity’s imperial ambitions over the natural world. This new method, he wrote, will apply “not only to natural but to all sciences” and will “embrace everything.” The new method of inquiry will allow for universal, objectivized knowledge. It is like an instrument, “a new machine for the mind,” that will infallibly guide humanity to understand the world as it really is. In this process of coming to know reality, Bacon assures us that the mind will not be “left to take its own course, but be guided at every step and the business be done as if by machinery.” In this way, humanity will gain infallible knowledge and total mastery over nature.

The key to Bacon’s domination of nature lies in the experimental method, and the dividing line between experimentation and domination is never distinct. The only reason for experimentation in the first place is to gain power over the world. As Carolyn Merchant points out, Bacon’s guiding image of nature is that of a female waiting to be dominated and violated, and he vows to his readers that the new philosophy will render nature the very “slave of mankind.”

Bacon wrote that “nature exhibits herself more clearly under the trials and vexations of art than when left to herself.” In other words, the sure road to understanding is through mechanical experimentation. For Bacon, experimentation is “an inquisition,” in which nature is compelled to offer up her hidden secrets. As part of his professional duties, Bacon was a legal inquisitor involved in the contemporary witch trials, which deeply influenced his language and imagery concerning the domination of nature. During these trials, confessions were tortured out of innocent women laid out on the rack. In similar fashion, Bacon insists that the mechanical experiments of the new philosophy must approach nature “under constraint and vexed; that is to say, when by art and the hand of man she is forced out of her natural state, and squeezed and moulded.” Through experimentation it will be possible to trick nature into confessing things that she might not under less strenuous testing. But once her secret is out, she can be forced to reveal it again and again. Thus Bacon explains that the scientific researcher needs to “follow and as it were hound nature in her wanderings, and you will be able, when you like, to lead and drive her afterwards to the same place again.” Through such experimentation, mankind will be able “to penetrate further,” pass beyond “the outer courts of nature,” and “find a way at length into her inner chambers.”

Since the measure of knowledge is power, the new philosophy aims at useful discoveries. In this way, Bacon writes, the mechanical arts do not “merely exert a gentle guidance over nature’s course; they have the power to conquer and subdue her, to shake her to her foundations.” Since “the dominion of man over nature rests only on knowledge,” the key to man’s mastery over the world lies in organized scientific research. In this way, the findings of many researchers will be conjoined in one common enterprise and knowledge will grow incrementally. Bacon calls for a united effort, exhorting all men to make peace among themselves so that they may turn “with united forces against the Nature of Things, to storm and occupy her castles and strongholds, and extend the boundaries of human empire, as far as God Almighty in his goodness may permit.” The new philosophy will allow the human race to “recover that right over nature which belongs to it by divine bequest” and establish the “Dominion of Man over the Universe.” In short, Bacon promises that his new method will lead to genuine progress in every field, usher in the “truly masculine birth of time,” and render nature the “slave of mankind.” 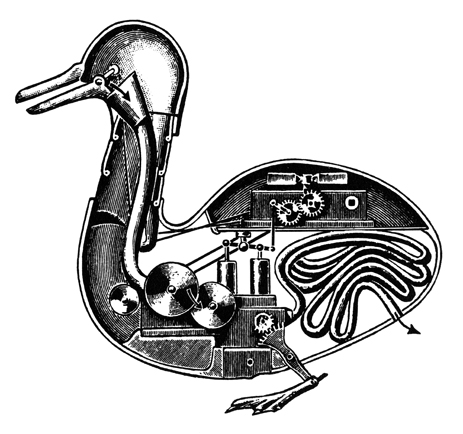 An automaton of a duck, inspired by the mechanical philosophy, created by Jacques de Vaucanson in 1739. René Descartes had written, “I have described this earth, and indeed this whole visible world, as a machine,” and under the spell of the mechanistic philosophy, even animals and the human body came to be pictured as machines rather than living organisms.

Copyright © 2013 by David Fideler. All rights reserved. No part of this text may be duplicated or republished in any form without the permission of the author.

“A timely and important book . . . Here is the hope as well as the understanding we need . . . ” — Llewellyn Vaughn-Lee, Ph.D., editor of Spiritual Ecology

Now available from your local bookseller or Amazon.com